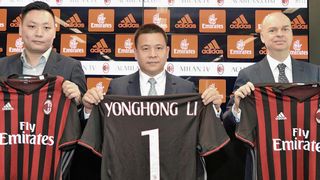 Ousted AC Milan president Li Yonghong has hit back at former partners Elliott Management, who have assumed control of the club.

Earlier this month Li defaulted on a payment as part of the €300 million debt owed to Elliott, prompting the US-based hedge fund to repossess the holding company in Luxembourg that Li used to buy seven-time European champion Milan in April 2017.

Elliott has promised to inject €50m into Milan - who on Friday successfully overturned a UEFA-imposed ban that threatened to prevent them from playing in next season's Europa League - in an attempt to improve their fortunes but Li is furious at being cut out.

"It is with great regret that, as president, I address this letter to all fans, shareholders and employees of the prestigious AC Milan,” he said in a letter to Il Sole 24.

"Despite the numerous and incorrect rumours that emerged in the Italian and international press, I can confirm that the Shareholders’ Meeting, called by Elliott for July 21, will sanction my exit and those of the directors I appointed to the club’s board.

"First of all, I would like to clarify the following. My purchase of Milan was neither a rash decision or one dictated by a passing infatuation.

"It stemmed from my passion for the team and belief in the economic potential of an investment in one of the noblest football teams in the world.

"Until June 30, 2018, I had paid almost €880m for AC Milan, of which only €280m was funded through Elliott, while I personally provided the remaining part.

"I was convinced that Elliott was a trustworthy investor and, above all, a partner to share the duties and honours of a stimulating adventure like the ownership of a team who, throughout their glorious history, have won, among other trophies, seven Champions Leagues and 18 Serie A titles.

"I made a mistake and only discovered it to my great detriment during my tenure. Elliott showed itself from the start to not be the partner I imagined but rather a lender totally disinterested in the complex management of a club of Milan’s standing, despite its control of the team’s board.

"All this happened despite repeated declarations from the fund regarding its alleged support for the club.

"During my time as president, I would like to remind all of you that I have never failed in my commitments and for this, I have proof of over €200m invested by me in the team under my ownership.

"I am ready to fight and I will do it to safeguard my rights and give assurances to the AC Milan shareholders, whom my beloved club deserve.

"Any deliberate and intentional manoeuvres to reduce the value of AC Milan will be prosecuted by law. Thank you for your hospitality and attention."