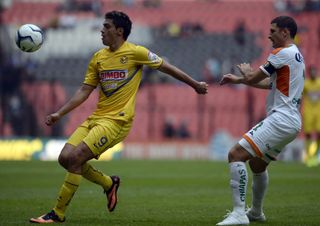 The five-time winners were eliminated from the continental competition on Tuesday after a 1-0 loss to Costa Ricans Alajuelense.

Miguel Herrera's America side will host ninth-placed Puebla holding a six-point lead atop the league after winning 10 of their opening 13 games.

America will be hurting from their Champions League exit and drew at Cruz Azul last time out in the league.

Second-placed Santos Laguna will be hoping to stay in touch of America ahead of their trip to strugglers Atlante on Saturday.

They have striker Oribe Peralta equal atop the league's goalscoring charts with nine in what has been a standout start to the season.

Pablo Velazquez sits alongside Peralta with nine as his Toluca prepare for an important clash against Leon.

Leon are third but have lost two of their past three league matches, while Toluca are fourth after a five-match unbeaten run domestically.

Guadalajara, 11-time league champions, are bottom of the table ahead of their trip to Morelia.

With just one win in 13, Guadalajara desperately need a win but will find it tough against sixth-placed Morelia.

Monterrey will be aiming to end a three-match losing run in the league when they host Chiapas on Saturday.

Queretaro enter their trip to struggling Atlas on Saturday as favourites and mid-table sides Tijuana and Tigres UANL do battle.

Cruz Azul should have too much for Pachuca and Pumas UNAM and Veracruz complete the round when they meet on Sunday.