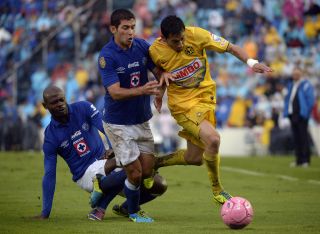 Perhaps with an eye on their CONCACAF Champions League clashes on Tuesday, Cruz Azul and America were unable to be separated at the Estadio Azul.

League leaders America, who are six points clear, went in front on the stroke of half-time thanks to Luis Rey.

Rey's towering header from a Miguel Layun cross had America on track for their 11th win in 13 league matches this season.

Luis Perea levelled the contest for Cruz Azul, who are fifth, on 70 minutes when he headed in a corner.

Santos Laguna moved into second on the back of their third straight league win – a 3-2 victory at home to Monterrey.

Oribe Peralta started the scoring on 49 minutes as his thunderous 30-yard effort went in off the post.

Jesus Escoboza was on hand to head in a rebound on the hour-mark before Mauro Cejas appeared to put the game to bed three minutes later.

Veteran Humberto Suazo made for a nervous finish with a long-range deflected strike and cracking free-kick but his brace was too late.

Elsewhere, Queretaro edged past Leon 2-0 and a 10-man Toluca held on for a 0-0 draw at home to Tijuana.

Puebla were 2-0 victors at home to Atlas and Guadalajara's struggles continued as they were beaten 3-1 at home to Pachuca.

Alan Pulido led Tigres UANL to a 3-1 win over Atlante as he scored a brace.