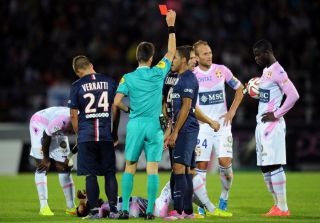 Evian have previous for springing surprises against PSG, having beaten them in the Coupe de France and Ligue 1 in recent years, and again frustrated the champions on Friday, with Yohan Cabaye's second-half dismissal compounding Laurent Blanc's woes.

The visitors were missing influential striker Zlatan Ibrahimovic, Thiago Motta and captain Thiago Silva, with the absence of the former in particular proving decisive in a first half of few chances.

Edinson Cavani - having opened his account for the season against Bastia last weekend - came close with a long-range free-kick before the interval as the hosts successfully frustrated PSG.

Having shipped six goals to Rennes in their last outing, Pascal Dupraz's defence were in much better shape on their return to Annecy and were boosted by Cabaye picking up a second yellow card shortly after the hour.

With a man advantage, the hosts saw out the draw to pick up their first point of the new campaign as PSG's stuttering start to their quest for a third-consecutive league title continues.

Blaise Matuidi's burst and cross from the left spelt danger for Evian in the opening five minutes before the hosts managed to clear as PSG quickly settled into their rhythm.

However, Blanc's men struggled to break down an Evian side who appeared more than happy to sit deep and allow their opponents plentiful possession.

Uruguay striker Cavani went close again before the half-hour as he twisted away from two defenders only for Jesper Hansen to keep out his strike.

However, the chances dried up before the break, with Evian able to successfully stifle the champions - who struggled to muster too much of note without the talismanic Ibrahimovic.

PSG continued to dominate possession after the break but frustration was evident among Blanc's men as Cavani was adjudged offside, having been sent through on goal, before Cabaye picked up a second yellow card.

A late challenge on Bille Nielsen saw him sent off for the first time in a PSG shirt to sum up a disappointing night for the Parisians.

Cavani and Nicolas Benezet had opportunities for either side late but it ended goalless as Evian again shocked the title holders at the Parc des Sports.