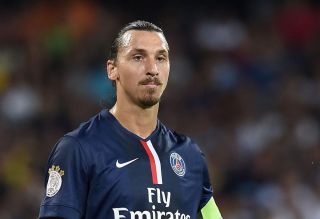 In the 24th minute at Parc des Prices, Saint-Etienne goalkeeper Ruffier lost control of a simple backpass and could not prevent the ball trickling over the line as the hosts were gifted the lead in farcical fashion.

Ibrahimovic headed in a second before half-time, and the Sweden international then capitalised on another defensive error to round Ruffier and score in the 62nd minute.

Edinson Cavani added a fourth a minute later with a thumping drive which flew in off the upright, before Ibrahimovic completed his treble 18 minutes from time with another cool finish.

The win lifts the defending champions to second in the table, two points behind Bordeaux, who dropped points for the first time this season in a 1-1 draw at home to Bastia.

The visitors got their first win of the campaign with last week's 1-0 home victory over Toulouse, and they were ahead again at Stade Jacques Chaban-Delmas when Gadji Tallo - on loan from Roma - struck in the 18th minute.

Claude Makelele's men were unable to hold onto their advantage, however, and were pegged back 12 minuted from time by Uruguayan striker Diego Rolan.

Elsewhere, Lyon's poor start to the season continued as they were the victims of a late comeback as Metz won 2-1, their first success of the season.

After finishing fifth at the end of 2013-14, Lyon were dumped out of the UEFA Europa League on away goals by Romanian outfit Astra on Thursday and Hubert Fournier's woes continued at Stade Saint-Symphorien.

All appeared to be going to plan when Alexandre Lacazette tapped home at the far post in the 68th minute, but Metz mounted a stirring fightback in the final eight minutes.

Although the season remains in its early stages, Fournier will be concerned by Lyon's plight, with a third defeat in four league outings leaving them fourth from bottom, outside the drop zone on goal difference.