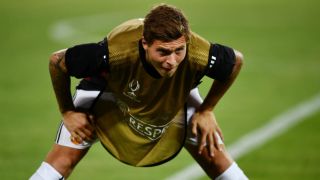 Victor Lindelof could be the "perfect" centre-back for Manchester United if he is given time to adjust at Old Trafford, according to former midfielder Jesper Blomqvist.

Lindelof, a €35million signing from Benfica in June, was unconvincing in the UEFA Super Cup defeat to Real Madrid and did not play a minute in his side's opening three Premier League games of the season.

Manager Jose Mourinho stated in August the 23-year-old would need time to adjust to England's top flight and compared his situation to that of Ricardo Carvalho, who became a pivotal player at Chelsea despite a difficult start.

And Blomqvist, who was part of United's treble-winning side of 1998-99, is confident fellow Swede will adapt to become a key figure.

"I think it's definitely one step up to come here to Manchester United for everybody and the situation with the competition for places is really tough," said Blomqvist.

"The guys that he's competing against now have been here longer and have been slowly adapting, getting more and more ready every year so I think he needs a bit more time as well but I still believe in him.

"He shouldn't feel too much stress really. I know there's pressure, especially because he was brought in for so much money, but he should take his time a little bit.

"He's a little bit young, but I believe a lot in him. He'll be better when he gets acclimatised.

"I feel like he's a perfect fit for a central defender but can also play on the right. He's very comfortable with the ball, he likes to play from the back and is very fast so he can be good one against one as well.

"I definitely feel he's the perfect player for United but it takes time. If you look at the other players here now, all of them have taken some time.

"I felt it too. Whenever you come to a big club like this there's so much going on around and it's not as easy to get into the club, into the team, because it's more spread out than in a smaller club.

"It takes a longer time if you're not Dwight Yorke or somebody who just fits in everywhere and just never feels any pressure and really eases in."