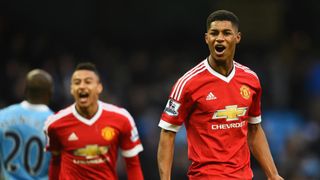 Lingard has enjoyed a breakout season for his boyhood club, but his impact has been bettered by Rashford, who already has five goals to his name despite only making his debut last month.

He scored two goals on debut against Midtjylland, then two on his Premier League debut against Arsenal and won the Manchester derby off his own boot when he scored in United's 1-0 win over Manchester City at the Etihad Stadium on Sunday.

"He's buzzing but I was keeping him grounded," said Lingard.

"He's already grounded anyway, to be fair. He has to keep his feet on the ground and I've told him that already.

"We look after the young ones and to see Marcus doing well is a great boost for the club and the home-grown talent coming through.

"I just told him not to over-hype things. He's done well and everybody is really happy for him."

Lingard said Rashford was impressing everyone at the club with his dedication to the cause and that has been repaid on the pitch as his team-mates came to his defence on more than one occasion during a fiery derby.

"He doesn't go out and doesn't drink. He's not one of the lads to start going out and get a big head, he's always been a hard worker," he said.

"I just think off the field is the most important thing. You have to get your rest and have your recovery time. He'll enjoy it as well, but will do it at the right time.

"When Marcus was coming through he was small, but he's massive now and will fill out. He will cause defenders even more problems when he fills out.

"He always had the ability and everybody recognised that. The manager has given him the chance and he is scoring a lot of goals now for us."

And Lingard said Rashford was not the only one delighted with his impact in the derby, with under-fire manager Louis van Gaal showing plenty of emotion after the game.

"He was buzzing," said Lingard.

"But obviously we know it's not like it's the last game of the season. We have to kick on now and focus on beating Everton [after the international break].

"We've got to take it game by game still. We have game-plans for set teams and, when we stick to them, we usually win."