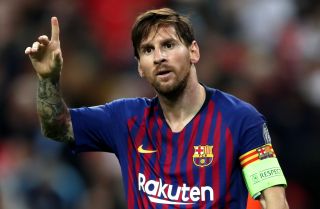 Lionel Messi’s Barcelona future is in doubt after their humiliating 8-2 Champions League defeat to Bayern Munich.

🗣Leo #Messi: "The header I scored in Rome in the Champions League final was my best goal."Do you agree? 📹 See all his goals and decide!👇https://t.co/cNxsD0A8Ohpic.twitter.com/3anCGroide— FC Barcelona (@FCBarcelona) October 9, 2019

The 33-year-old has over 700 to chose from, but he believes his goal in the 2009 Champions League final is his best.

A looping far-post header wrapped up a 2-0 win over Manchester United after Samuel Eto’o’s opener.

Two years after beating United in Rome, Messi provided a masterclass as he inspired Barcelona to a 3-1 win over Sir Alex Ferguson’s side at Wembley.

Pedro had already put Barcelona ahead before Messi claimed his first goal in England when he drilled in from the edge of the area.

David Villa added the gloss on the victory, with Barca winning their fourth Champions League title.

Having won the competition four times, there has been no lower point for the Argentina forward than the crushing 8-2 defeat to Bayern Munich last week.

Barca were torn apart in their Champions League quarter-final in Lisbon and the result will surely spark sweeping changes at the Nou Camp both on and off the pitch.

Messi and Co were outgunned and outclassed as they conceded eight for the first time since 1946 and they were confronted by angry fans on their return to Spain.

Messi retired from international duty after missing in a penalty shoot-out as Argentina lost the Copa America final to Chile in 2016.

It was their fourth defeat in a major final in nine years and Messi said afterwards: “For me, the national team is over. I’ve done all I can. It hurts not to be a champion.”

But he reversed his decision less than two months later and returned to help his country reach the 2018 World Cup, only to be eliminated in the last 16.

Olympic gold but nothing more

Messi won his only international honour at the Beijing Olympics in 2008.
He scored the opening goal and assisted another in their 2–1 victory over the Ivory Coast.

After qualifying from the group, he netted in a 2-1 win over Holland to set up a semi-final with Brazil, which Argentina won 3-0.

A 1-0 victory over Nigeria clinched the gold medal, but Messi has never matched that success at international level.