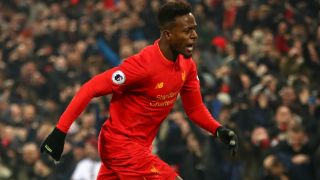 Divock Origi came off the bench to inspire Liverpool to victory against Sunderland and send Jurgen Klopp's men to the top of the Premier League on Saturday.

Origi, a 34th-minute substitute for the injured Philippe Coutinho, curled home the opener with 15 minutes to go and James Milner added a late penalty to move the Merseyside club back above Manchester City at the summit on goal difference. They can be replaced by Chelsea should Antonio Conte's men beat Tottenham in the late game.

Sunderland battled gamely but wasted the few opportunities that came their way to see their two-match winning streak come to an end.

Victory maintained Liverpool's unbeaten record at Anfield this season but it came at a heavy cost, with Coutinho potentially facing a lengthy absence after coming off second-best in a challenge with Ibrahim Ndong.

After receiving treatment, the Brazil playmaker was carried off on a stretcher with his right foot in a brace. Roberto Firmino also limped off late on to add to Klopp's woes.

Sunderland boss David Moyes spoke beforehand of how his side would "park the double-decker bus" but, while they defended stoutly, the strugglers also offered a threat on the break in the first half.

Having restricted Liverpool to a Georginio Wijnaldum effort that flew straight at Jordan Pickford, it was the visitors who created the first real opportunity of the afternoon after 17 minutes.

A Sunderland corner was only partially cleared and when Billy Jones hoofed the ball back into the area, above an advancing Liverpool defence, it fell nicely for Steven Pienaar but his close-range shot was well blocked by goalkeeper Loris Karius.

Klopp's men showed flashes of the quick, fluent football that has put them firmly in title contention but they were unable to work Pickford, with Firmino and Wijnaldum firing long-range efforts off target.

Coutinho's injury may have long-term repercussions for the Reds but the immediate impact was to galvanise a hitherto sterile Liverpool side, with the home side dominating possession prior to the break.

Lovren also blasted off target from 20 yards before Pickford got down well to smother Mane's shot.

The start to the second period was similar to the ending of the first, with the game taking on the appearance of a defence versus attack exercise, Sunderland struggling to get out of their own half.

Mane and Firmino both wasted presentable chances, the former volleying wide from close range and the latter seeing a low drive well save by the impressive Pickford.

Klopp was cutting a frustrated figure on the touchline and he demanded more from the home supporters after 63 minutes with some frantic arm waving in a bid to liven up the Liverpool fans.

The hosts cranked up the pressure further but their all-out attack led to gaps at the other end and Duncan Watmore ought to have put Sunderland in front but dallied when faced by Karius and the chance went begging.

It was to prove costly as, after Jason Denayer had blocked a Mane effort four yards out, Liverpool's next attack produced the opening goal.

Origi cut inside Watmore down the Liverpool left and his cross-shot eluded everyone and drifted past Pickford.

Sunderland rarely looked like getting back into the game and Liverpool doubled their advantage in injury-time when Ndong was adjudged to have tripped Mane and Milner made no mistake from the spot.