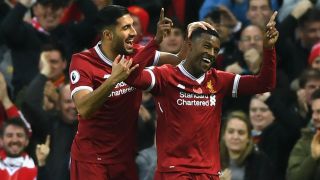 Jurgen Klopp came out on top against good friend David Wagner as Liverpool recorded just their second Premier League win since September 9 with a 3-0 home triumph over Huddersfield Town.

Smarting from a 4-1 loss to Tottenham last Sunday, a lethargic home side struggled to break down resolute opponents during an opening half that saw Huddersfield goalkeeper Jonas Lossl keep out a Mohamed Salah penalty.

However, Daniel Sturridge eased the simmering tension inside Anfield early in the second half, capitalising on an error by Tommy Smith to break the deadlock five minutes into the second half and score his 100th goal in club football.

Roberto Firmino made it 2-0 just eight minutes later, the Brazilian heading home a James Milner corner to give Liverpool some much-needed breathing space.

Georginio Wijnaldum added a third as Huddersfield, who have still not won away since the opening weekend of the campaign, were bought back down to earth with a bump following their shock 2-0 home win over Manchester United a week ago.

After a week full of questions over his team's defensive frailties, Klopp initially intended to keep faith with the same back four who started the 4-1 loss last time out, only to be forced into a late change.

Having been withdrawn just 31 minutes into the game at Wembley Stadium, Dejan Lovren failed to even make it to kick-off this time, the much-maligned centre-back ruled out after sustaining an injury while warming up.

Wagner had embraced Klopp on the touchline prior to the start but showed no willingness to help out his compatriot with his tactics, setting up the visitors to defend deep and frustrate their opponents.

The policy worked during an opening half that saw Liverpool's players produce little to lift a subdued home crowd.

They were handed the chance to go ahead three minutes before the break when Smith's blatant shirt pull on Firmino at a corner was spotted by referee Kevin Friend, only for Lossl to guess correctly and keep out Salah's driven penalty.

However, Huddersfield's club captain was still involved in the opening goal, as his attempt to head clear a long ball inadvertently teed up Sturridge, who expertly chipped the advancing Lossl in front of the Kop.

The England international missed out on his 101st club goal when Mathias Jorgensen's desperate sliding clearance prevented him from tapping home, although Liverpool did not have to wait much longer for their second.

From the resulting corner, Milner's inswinging delivery picked out the run of Firmino, who evaded marker Aaron Mooy to plant a close-range header through Lossl's legs and into the net.

After Joel Matip came close to converting from another set-piece opportunity, Wijnaldum rounded out the scoring with a rising, right-footed shot that flashed high into the top-right corner.

Able to enjoy the closing stages, Klopp celebrated the much-needed victory by planting a kiss on opposite number Wagner after the final whistle, showing that while the battle between the two Germans was one-sided, the bond between the two former Mainz colleagues remains strong.