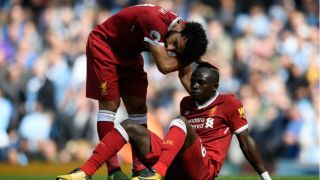 Mane was sent off during the 37th minute of Liverpool's 5-0 defeat at the Etihad Stadium on Saturday when he caught the Brazilian in the face with a high boot.

The Senegal international is eligible for the Reds' Champions League opener against Sevilla but will miss the home game with Burnley this weekend and consecutive trips to Leicester City in the Carabao Cup and Premier League.

Ederson left the field on a stretcher following the challenge but was named in City's squad for the Champions League match at Feyenoord on Wednesday having returned to training in protective headwear to cover his facial wounds.

An FA statement read: "Sadio Mane's three-match suspension, which was effective immediately, remains in place after his claim of excessive punishment was rejected following an Independent Regulatory Commission hearing.

"The Liverpool forward was dismissed for serious foul play during the game against Manchester City on Saturday."

Liverpool boss Jurgen Klopp and his City counterpart Pep Guardiola both expressed sympathy with Mane after the match, although Klopp initially stated his club would not lodge any appeal.

"It would be another waste of time, like the game today," he said.

Mane posted a message on Facebook apologising to Ederson, labelling the clash an "accidental collision".