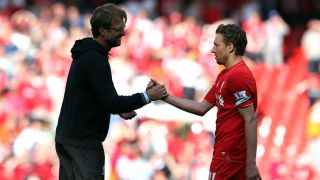 Liverpool are awaiting further news on Lucas Leiva's hamstring injury after he hobbled out of their friendly win at Huddersfield Town.

The Brazilian had to be withdrawn in the second half at the John Smith's Stadium, with young goalkeeper Shamal George replacing him in the 2-0 victory after boss Jurgen Klopp has used all his outfield substitutes.

Klopp does not yet know the full extent of the issue.

"We have to wait for the exact assessment," he told the media.

Klopp also conceded that Lucas' withdrawal made it tough for his side as a number of tactical switches saw Danny Ings deployed in midfield and George up front.

"In the first half we should have had a clearer lead," the German boss said.

"[In the] second half, after Lucas' injury, we had to fight and that's what they did. Of course it was not a normal pre-season game anymore.

"They [Huddersfield] changed a lot, they had two good teams.