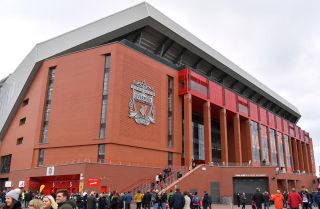 Liverpool have temporarily suspended the fan responsible for the offensive Divock Origi banner displayed at the Champions League match in Genk.

The PA news agency understands the supporter has been denied access to any of the Reds matches, home or away, after a meeting of the club’s Sanctions Panel. Any tickets he may have already purchased will be refunded.

A full investigation is being carried out by Liverpool – independent to that being conducted by UEFA and Belgian police – and, following the receipt of a letter and email, the fan has been given 14 days to respond to the notice of his temporary ban.

The panel will meet again after a reply is received. Final punishments range from a full ban, a ban and education, education on its own or other minor sanctions.

It is understood Liverpool’s letter has referenced that education will be considered and the club have also been in touch with Kick It Out for advice and support.

Liverpool condemned the Photoshopped banner of the striker for “perpetuating a racial stereotype” when they became aware of its presence inside the ground last week and acted to have it removed swiftly.