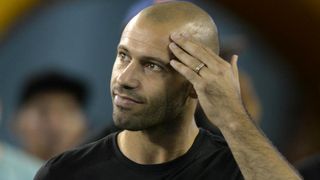 Serial trophy-winning midfielder Javier Mascherano has revealed why he prefers Liverpool to Barcelona.

Liverpool extended their run at the top of the Premier League table to 22 points by beating Southampton 4-0 at Anfield on Saturday.

It's the biggest lead that a team has had at the end of a day in English top-flight in history.

Jurgen Klopp's side are being likened to some of the greatest teams Europe has ever seen.

One player who would know about great teams is former Liverpool midfielder Javier Mascherano.

Mascherano now plays in his native Argentina for Estudiantes, having just moved from China.

The 35-year-old spent three years at Anfield before moving to the Camp Nou, where he stayed for eight years - winning five La Liga titles and two Champions Leagues.

But despite the difference in time and honours at the two clubs, Mascherano says he still feels more attached to Liverpool.

Speaking to CNN, Mascherano said: "I obviously have a lot of love for Barcelona, I spent the best years of my career there but I would choose Liverpool.

"I feel something special for them. Yes, right now is the best in the world, Liverpool represents me a lot."

Whilst Liverpool are running away with the Premier League, Barcelona are trailing their great rivals Real Madrid by six points in La Liga.

Barcelona can half Madrid's lead when they play Levante on Sunday evening at 8pm.