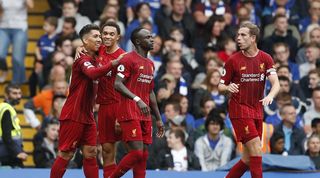 Liverpool chief executive Peter Moore has praised the Fenway Sports Group's "miraculous" work at Anfield and told arch-rivals Manchester United that the Reds are "back on their perch".

Former United boss Alex Ferguson famously declared that his greatest challenge at Old Trafford was knocking Liverpool off it.

The Merseysiders were the dominant force in English football when Ferguson took charge in 1986.

Liverpool went on to win the First Division in 1988 and 1990, but they have not won a league title in the last 29 years.

Meanwhile, Ferguson led United to 13 Premier League crowns between 1993 and his retirement in 2013.

However, United have declined since the legendary manager vacated the Old Trafford hot seat six years ago, with Ole Gunnar Solskjaer's side already 10 points adrift of table-topping Liverpool after six games this season.

And Moore, who has supported the Reds since childhood, insists his club have now regained their primacy.

"We are back on our perch, as we famously say," he told former Liverpool striker Michael Robinson at the World Football Summit.

"What the Fenway Sports Group have done at Liverpool over the past nine years is nothing short of miraculous.

"They have gone through ups and downs but have stayed the course and never taken a penny out of the club."

And Moore believes the German's character is key to his success.

"Jurgen is one of the more holisitic human beings you will ever meet," he added. "He is able to keep the ship going straight, motivate not just the players but his staff, the coaching staff, the sports science staff - he keeps everyone on an even keel.

"His personality is infectious. His charisma is without question. Even when you have lost he makes you think there is a brighter sunshine ahead."

Liverpool face MK Dons in the EFL Cup on Wednesday, before a trip to Sheffield United when the Premier League resumes this weekend.