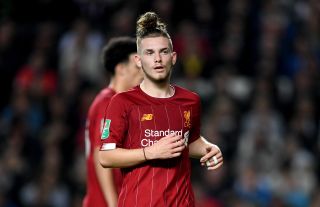 The promising 17-year-old signed his first professional contract with the Reds in July and has made nine appearances since joining from Fulham in the summer of 2019.

Following Liverpool’s exit from the Carabao Cup, future opportunities were limited for the England youth international so a decision was taken at Anfield to allow him to go on loan if the player wanted.

“Liverpool forward Harvey Elliott has joined Championship side Blackburn Rovers on loan for the remainder of the 2020-21 season,” said the Reds in a statement.

Elliott is the fourth arrival of the day at Ewood Park, following Middlesbrough goalkeeper Aynsley Pears, who has signed a four-year contract, and Leeds’ Barry Douglas and Norwich’s Tom Trybull, both on season-long loans.