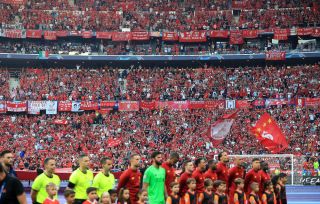 Liverpool return to the scene of last season’s Champions League triumph on Tuesday night when they take on Atletico Madrid at the Wanda Metropolitano in the first leg of their last-16 tie.

Here, the PA news agency looks back at five visits Liverpool have made to Madrid.

The Merseysiders took on Thursday’s opponents Atletico in the Champions League group stages back in 2008, with the sides each taking a point from a 1-1 draw at the Spaniards’ previous home, the Vicente Calderon Stadium. Robbie Keane opened the scoring in the first half before Simao equalised with seven minutes remaining to earn the hosts a share of the spoils.

Later in the same season, Liverpool headed across Madrid to take on Atletico’s city rivals Real in the Champions League’s last 16. The Reds beat Juande Ramos’ side 1-0 in the first leg as Yossi Benayoun headed in the only goal at the Bernabeu in the closing stages. Liverpool went on to win 5-0 on aggregate following a comprehensive 4-0 victory at Anfield.

Liverpool were back in Madrid the following campaign but this time they were competing in the Europa League. They suffered a narrow 1-0 semi-final first-leg defeat in the capital as former Manchester United striker Diego Forlan scored the only goal after nine minutes. Forlan then struck an extra-time away goal in Atletico’s 2-1 defeat at Anfield in the return leg to book his side’s place in the final against Fulham.

After a few years away from the Spanish capital, Liverpool returned to face Real at the Bernabeu in a Champions League group game in 2014. That ended in a 1-0 defeat, with Karim Benzema turning home the only goal in the first half.

Liverpool’s impressive 2018-19 season came to an unforgettable conclusion as Mohamed Salah and Divock Origi fired Jurgen Klopp’s men to Champions League glory against Tottenham at the Wanda Metropolitano. Salah opened the scoring from the penalty spot after two minutes and the Reds never looked back, with Origi wrapping things up in the 87th minute to make Liverpool the champions of Europe for the sixth time.