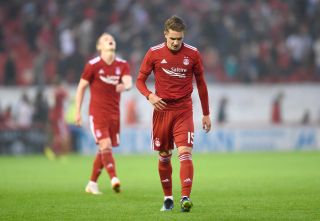 Scott Wright will not be following Dundee through the Ladbrokes Premiership trapdoor if they go down – but that will not stop the Aberdeen youngster from giving his all to the Dens Park cause.

Defeat to Hamilton at home on Saturday will relegate the Taysiders, while a point may also not be enough if St Mirren grab a result against Motherwell.

The picture is bleak for Jim McIntyre’s men but on-loan Dons midfielder Wright knows that if the worst happens he will not find himself in the Championship with them next term as he returns to Pittodrie.

The 21-year-old joined McIntyre’s Dens revolution in a bid to boost his first-team minutes as he looks to show Reds boss Derek McInnes he can be a star of the future for his parent club.

But his personal concerns have been pushed to one side after realising the seriousness of the position his new team-mates find themselves in.

Relegation could have serious consequences for Dundee and the club’s back-room staff and Wright is determined to play his part in their desperate rescue mission.

He said: “It’s a different kind of pressure for me.

“Being at Aberdeen, they are at the other end of the table which brings a different kind of pressure.

“Last season we were going to Celtic Park to guarantee second place, so there was pressure on that match.

“But here the pressure is trying to make sure we stay in this league.

“When I decided to make the move here on loan, I thought it would be good for me to get regular games.

“But now that I’m here my main focus is to keep Dundee up.

“When I first arrived, I remember thinking during my first week I just needed to get my head down and look to play as much as I could.

“But it sinks in quickly what is at stake. Everyone is in the same boat in our dressing room, we’re all trying to pull in the same direction for the club.

“Good players say they thrive under pressure and hopefully that’s what I’m going to do. If anything it will hopefully be good for my football education, coming here and operating under a different type of pressure.”

Dundee scored three times at Fir Park last week but it was not enough to spare them agony in injury time as Well struck late to snatch a 4-3 win.

Now Wright admits his team have no option but to go all in and gamble on a win that could yet see them hit the survival jackpot.

“We need to throw caution to the wind,” he said. “We know the position we’re in and we know that other than three wins, it’s not going to be good enough.