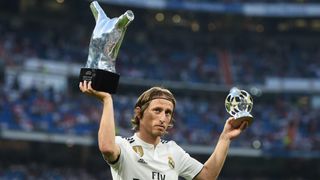 Julen Lopetegui has backed Luka Modric for the Ballon d'Or and FIFA's The Best award, hopeful that the notable individual prizes go to Real Madrid players.

Modric played a major role in Madrid's third successive Champions League success and Croatia's journey to the World Cup final in Russia, winning the Golden Ball in the process.

The 33-year-old is one of the three final nominees for FIFA's award along with former team-mate Cristiano Ronaldo and Liverpool's Mohamed Salah, with Lionel Messi a shock absentee.

Modric is the favourite in the eyes of many, despite some highlighting that Ronaldo's haul of 15 goals was vital in their European success.

Although Lopetegui insists he has little interest in such individual prizes, he would like to see a Madrid player claim them.

When asked who he thinks deserves to be called the best player in the world, Lopetegui told reporters: "You said it yourself, I don't believe much in individual prizes.

"Football is a team game, but if you have to recognise great players, then I'd like it to go to our club.

"Modric had a great season, but that's about all I can say. It's a team game and I hope the team wins tomorrow [Saturday, against Espanyol]."

Madrid spent a reported €40million on Thibaut Courtois in pre-season, yet the Belgian has been unable to nail down a first-team spot.

Courtois and Keylor Navas have been rotating between the posts, each playing two LaLiga games so far this term and Lopetegui insists it is a system which is working well.

"They're training well, competing well," Lopetegui said. "I can't tell you much more than that.

"It's a normal situation for them, perhaps more normal inside the club than from outside.

"They're very professional and they want to prove that to everyone, and in with respect to the work of the three goalkeepers we have, there are no problems.  They're working very well."