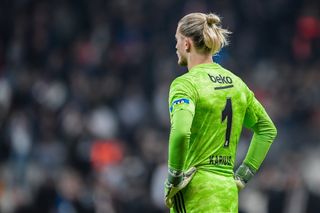 After Alisson arrived from Roma for a world-record fee for a goalkeeper, Loris Karius was already heading for the exit.

He was sent to Besiktas on a two-year loan, with the option to make the deal permanent for £7.25million, but The Athletic has revealed that he will be returning to Anfield instead.

Although Karius has played regularly during his time in Turkey, making 62 appearances in all competitions so far, he has failed to impress sufficiently.

Last season he came under fire from the club’s manager, and was jeered by Besiktas supporters following a poor display in a recent Turkish Cup defeat.

For now, his future remains uncertain but there seems no way back for him at Liverpool, where his career was cruelly defined by one match – the 2018 Champions League final.

Having overtaken Simon Mignolet as the club’s first-choice goalkeeper earlier that season, he was selected to start against Real Madrid in European football’s showpiece occasion in Kiev.

It was to be Karius’ 49th, and seemingly final, appearance for Liverpool as his mistakes handed victory to Zinedine Zidane’s side.

First, Karim Benzema blocked his attempt to roll the ball out to Dejan Lovren, diverting it into the net for the opening goal.

Then, late on, he flapped at Gareth Bale’s long-range shot which should have been easy enough to stop, giving Madrid a 3-1 win and their third consecutive Champions League title.

Karius, who it was later revealed might have been suffering from concussion after a clash with Sergio Ramos shortly before his first error, has been under great scrutiny ever since.