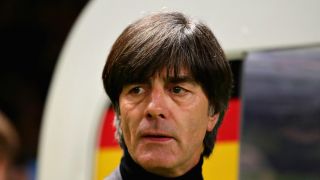 Germany coach Joachim Low said he was "upset" after the world champions continued their poor form with a shock loss against Austria.

Germany are winless in five friendlies since completing their World Cup qualifying campaign and have only one remaining match, against Saudi Arabia, before heading to Russia.

Saturday's game was subject to a long pre-match delay due to heavy rain, with Low left annoyed by his side's poor performance against Austria, who recorded a seventh straight win despite failing to qualify for the World Cup.

"It was our own fault, because after taking the lead we controlled the game, but right before the break and the first 15-20 minutes after the break we weren't in the game at all. We lost the ball unbelievably often, there were so many turnovers.

"We are not used to that from our team. We let the Austrians get back in the game. Even before the equaliser they had a couple of chances to score, you could see it coming. In this phase we were careless and in the second half we could not turn it around anymore.

"We didn't find our game. Our performance was disappointing, there were many mistakes made, many things to criticise."

Scored a goal, but not what we expected from today's match. Looking forward to the World Cup start even though we still have lots of work ahead of us. June 2, 2018

Although Germany slipped to a second consecutive loss after a narrow defeat to Brazil in March, there was one bright note in the return to fitness of Neuer.

The Bayern Munich goalkeeper had been out of action since September due to a foot injury but boosted his World Cup hopes as he came through the 90 minutes unscathed.

"He doesn't have any problems with his foot after the game, that's important. And the second thing was that he reacted great in many situations, he reacted fast.

"You couldn't tell he didnt play for a while, and that's why I am absolutely satisfied from what I saw from Manuel today."