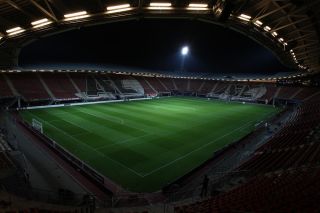 Manchester United will bid for back-to-back Europa League wins on Thursday in Holland against AZ Alkmaar.

Arne Slot took on his first senior management role in July when promoted from assistant at AZ following John van den Brom’s departure to Utrecht. The former midfielder’s 18-year playing career included spells at PEC Zwolle, NAC Breda and Sparta Rotterdam and he began coaching in the youth-team set-up at Zwolle before becoming assistant boss at SC Cambur. The 41-year-old joined AZ in 2017 and in his current role has steered them through three qualifying rounds and into the Europa League group stage.

AZ have picked up where they left off last season after finishing fourth in the Eredivisie under Van den Brom. They are currently third in the table, one point behind leaders Ajax after winning six and losing one of their first eight league games. Slot’s side head into their clash with United on the back of three straight league wins and drew their opening Group L fixture 2-2 against Partizan in Belgrade despite the first-half dismissal of Norway defender Jonas Svensson.

Slot’s squad is mainly made up of Dutchmen, but there are two who United will know all about following spells in the Premier League. Defender Ron Vlaar joined Aston Villa from Feyenoord in 2012 and went on to skipper the side the following season. The centre-half was restricted by a series of injuries during his three years at Villa Park. Midfielder Jordy Clasie was signed by Southampton from Feyenoord for £8million in 2015 and returned to Holland with AZ last summer after loan spells at Club Brugge and Feyenoord.

AZ were unbeaten in 32 home games in European competitions from 1977-2007 until a 3-2 defeat to Everton in a UEFA Cup group stage match. They lost to Ipswich in the UEFA Cup final in 1981, the same year they won the Dutch title and the following season they lost 3-2 on aggregate to Liverpool in the second round of the European Cup. Their only Champions League campaign came in 2009/10 – they drew 1-1 and lost 4-1 to Arsenal – and this is the sixth time they have reached the Europa League group stage.