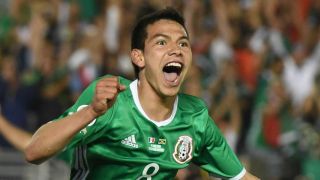 Pachuca forward Hirving Lozano has cooled speculation that he is on the verge of joining Manchester United.

The Old Trafford side have already brought in Eric Bailly, Zlatan Ibrahimovic and Henrikh Mkhitaryan ahead of the 2016-17 campaign and manager Jose Mourinho stated earlier this week they are keen to sign a fourth player in the weeks to come.

Reports from Mexico suggested Lozano could be United's next new arrival, but the 20-year-old has made it clear he is unaware of any potential transfer.

"It's nice to hear people talk about a potential move to Manchester United, but it would have been better if it was actually a fact," Lozano told Record.

"I am at Pachuca now and we will see what happens in the future."

Lozano has a contract with Pachuca until June 2020.