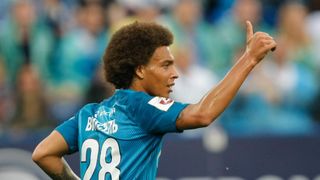 Axel Witsel could be on his way to Juventus after Zenit coach Mircea Lucescu said the Belgium international had asked to leave the club.

The midfielder has been linked with the Italian giants, after a potential move to Everton reportedly fell through earlier this month.

Speaking after the Russian Premier League opener against Lokomotiv Moscow, Lucescu admitted that Witsel was keen to leave.

Witsel did not start the game, which ended as a 0-0 draw, entering the fray after 59 minutes in what could prove his last appearance for the club.

"Axel asked to leave," Lucescu was quoted as saying by GazzaMercato.

"I at one point had to add that I needed his experience, but I repeat, Witsel wants to leave."

Now, the imposing midfielder looks set to become the latest addition to an already impressive squad at Juventus.

Paul Pogba might be headed for the exit in Turin, but Massimiliano Allegri has already added Miralem Pjanic to his midfield stocks, while Witsel would further improve Juventus’ options.

However, Juventus do face some competition for the midfielder's signature, with Roma also said to be interested.