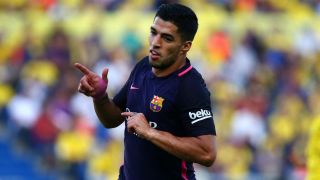 Barcelona star Luis Suarez vowed his side will keep the pressure on Real Madrid until the last moments of the final day of LaLiga after their victory over Las Palmas.

The league leaders recorded a 4-1 away victory on Sunday courtesy of a Neymar hat-trick and a strike from Suarez himself.

But Madrid still hold a game in hand and now just need four points from their last two games away to Celta Vigo and Malaga, Zinedine Zidane's men having beaten Sevilla 4-1 to keep the destiny of the title race in their own hands.

"What we have to do now is win against Eibar so that Real Madrid have to do the same against Celta and against Malaga on the final day," Suarez told reporters after the match.

"It depends on what they do on Wednesday and Sunday. We are aware that the season is a long one. We wanted to have a good dynamic in the final stretch of the season, we cannot lose any games and we are on the right track.

"We knew this match would be difficult in front of their [Las Palmas'] own fans but we deserved the three points.

"We had some problems with team-mates in defence but those who have come in did their best. We played well in the first half and we were effective [in front of goal]."

Suarez was asked why he opted to pass to Neymar for Barca's opening goal, rather than shoot himself when he was clean through on goal.

"We are here to help the team and get the league," he said. "I saw a team-mate in a better position than I was and that is why I gave it to him."