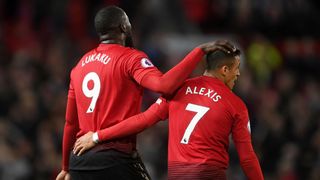 Sanchez broke the deadlock in a 3-1 win over his former club, with Lukaku having played a key role in the Chilean's goal.

And the Belgium international insisted he saw it coming.

"I told him in training, 'Listen, you're going to score'," Lukaku told MUTV.

"I said to him I'd give him the ball as long as he ran inside if I couldn't shoot. I said to him, 'Just run in and I'll find you'.

"I think you could see when I got the ball I was looking for him and he made the right run and the finish for him was incredible.

"We knew they would leave space for me and Alexis with the full-backs pushing on, so it would end up being 3 v 3 or 3 v 2 and we had a lot of moments when we could have countered better, especially in the second half.

"I think we could have scored two or three more goals to be honest, but 3-1 at Arsenal is very good."

The result saw Ole Gunnar Solskjaer extend his remarkable run at the helm to eight consecutive victories and Lukaku urged his team-mates to maintain those high standards.

"We feel great but it's the same in training," he said.

"We play a lot of games in a lot of competitions and every time you come into the games you know the situations and you have to keep on maintaining the pressure on the other team and keep on delivering the quality, that's what it's about, and on the counter-attack we're really dangerous.

"We're growing steadily and winning games, which is the most important thing."

Next up for United is the visit of Burnley in the Premier League on Tuesday.