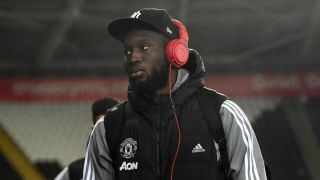 Jose Mourinho has again defended Romelu Lukaku's performances, labelling the striker as an "untouchable" member of his Manchester United team.

Belgium international Lukaku enjoyed a flying start to life at United, scoring 11 times in his first 10 appearances after joining from Everton for £75million.

But the 24-year-old has drawn a blank in each of United's past five games and Mourinho interpreted boos from some of the Old Trafford faithful when he replaced Marcus Rashford with match-winner Anthony Martial during Saturday's 1-0 win over Tottenham as a lack of support for Lukaku.

Zlatan Ibrahimovic closing in on a return from knee ligament surgery is likely to put Lukaku's performances under further scrutiny but, speaking ahead of Tuesday's Champions League meeting with Benfica, Mourinho insisted he has no reason to fear for his place.

"For me, he is untouchable for my team and untouchable also in the support and the respect that he deserves from the fans," the United boss told reporters.

"But also, I repeat, the fans are the fans, they pay their ticket and they do what they want, but as a manager I feel the duty to protect my players when I feel they deserve it."

Mourinho felt Lukaku's weekend performance against Tottenham's typically miserly backline served as an illustration of his form being in a good place.

"I don't think he's quiet at all," he said. "Ask [Toby] Alderweireld and [Jan] Vertonghen and [Eric] Dier if he was quiet. And they are some of the best central defenders in football.

United will secure a place in the last 16 if they beat Benfica and CSKA Moscow fail to do likewise against Basel.

Their Portuguese opponents are pointless after three matches – a state of affairs that surprises Mourinho after having to endure a hard-fought 1-0 win at the Estadio de Luz last time out.

"The players felt it was quite easy to win against CSKA and Basel and they also felt it was difficult to beat Benfica, it could have quite easily ended 0-0 or 1-1," he added.

"Benfica is much better than those two teams tactically and collectively. Of course I am not disappointed with the performance of Benfica so far, but sometimes a bad result in the first match can give you a better feeling about the rest of the matches.

"I reviewed the game against CSKA [a 2-1 home defeat] and found it quite difficult to understand how Benfica lost that match."