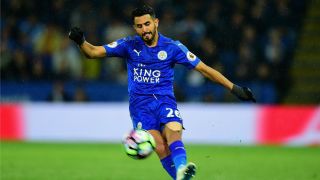 Riyad Mahrez wants to leave Leicester City, with the winger saying it is time for him to move on from the 2015-16 Premier League champions.

Algeria international Mahrez was named the PFA Player of the Year and scored 17 league goals as Leicester shocked the world by winning the title, but he has stated his intention to play regular Champions League football.

Leicester reached the quarter-finals of Europe's premier club competition before exiting to Atletico Madrid but they did not qualify for next season's tournament and Mahrez is now seeking a transfer from the club to fulfil his ambitions.

"Out of the huge admiration and respect I hold for Leicester City, I wanted to be totally honest and transparent with them and have therefore informed the club that I feel now is the time for me to move on," a widely circulated statement from the 26-year-old read.

"I had a good discussion with the chairman [Vichai Srivaddhanaprabha] last summer and we agreed at that time that I would stay for another year in order to help the club as best as I could following the transition of winning the title and in the Champions League.

"However, I am fiercely ambitious and feel that now is the time to move on to a new experience. I've always enjoyed a good relationship with the chairman and everyone at the club, and I hope I have been able to repay the faith shown to me by my performances and commitment on the pitch during my time here.

"I've had the four best seasons of my career at Leicester and have loved every moment. I feel immense pride to have been a part of what we have achieved during my time at the club, culminating in becoming Premier League champions.

"The relationship I share with the club and our amazing fans is something I will treasure forever and I truly hope they will understand and respect my decision."

Earlier in May, Leicester manager Craig Shakespeare said he was not aware of any gentleman's agreement that would allow Mahrez to leave the club at the end of the season, with Paris Saint-Germain and Arsenal among the clubs linked with a move.