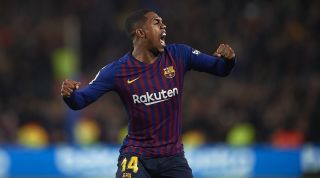 Borussia Dortmund have offered £37.5m for Barcelona winger Malcom, according to Goal.

The Brazilian moved to the Camp Nou from Bordeaux last summer, but he only scored one goal in 15 La Liga appearances.

And with Antoine Griezmann having joined an already star-studded squad in Catalonia, Malcom’s days at the club appear to be numbered.

Arsenal have been linked with the forward in the past, but they are not thought to be in the race to sign him this summer.

That could leave the path clear for Dortmund to complete a deal, with Barcelona reportedly willing to let him go for around the £37.5m mark.

And Malcom looks set to follow in the Spaniard’s footsteps as Dortmund look to build a squad capable of finishing above Bayern Munich in the Bundesliga next term.