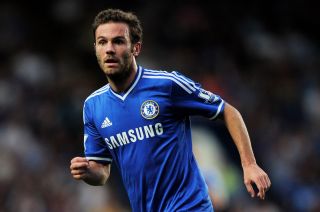 The Spain international moves to Old Trafford for a fee of £37.1 million, ending his two-and-a-half-year stay at Stamford Bridge.

Mata, Chelsea's player of the year for the past two seasons, had joined the club from Valencia in June 2011 and made 135 appearances.

He had fallen out of favour since the return of Jose Mourinho as manager at the start of the season, making just 11 Premier League starts this term.

He told the club's official website: "I am thrilled to be joining United. I have enjoyed some very happy years at Chelsea but the time has come for a new challenge.

"United is the perfect place for me and I am excited at the chance I have to be part of the next phase in the club's history.

"Chelsea is a top club and I have many friends there but you cannot turn down the chance to join Manchester United. I look forward to helping the manager and the team be successful in the coming years."

The move represents the big-money transfer that Manchester United fans have craved ever since new boss David Moyes took over from Alex Ferguson ahead of the start of the 2013-14 campaign.

Exits from both the FA Cup and the League Cup in the last month have heaped pressure on Moyes, who has also seen his side slip to seventh in the Premier League.

The Scot, though, believes he has signed a player of real quality.

"Juan is one of the finest playmakers in the game today and it's a real pleasure to have secured his signature," he said.

"He's been instrumental in Chelsea's recent success, with a notable 28 assists and 32 goals in his last two Premier League seasons.

"I have been impressed with the excitement he has shown to be part of the new Manchester United. I know our fans have admired Juan for some time now – he has always played well against us – and I know they will be delighted to see him in the red of United, starting on Tuesday."

Mourinho admitted that the move was a good one for all parties.

"I and everyone at Chelsea have massive respect for Juan and his big talent, and when he told us of his wish to move on because he wanted to play more, we did not want to deny him this opportunity," he told Chelsea's official website.

"We want him to be successful in his career and as well as that, this transfer makes huge financial sense to us at Chelsea.

"We are pleased Juan will stay in England - even with a rival club. He is happy in this country and it is good the Premier League retains such a talented player.

"Juan moves with our full blessing and I can speak on behalf of everyone at the club in thanking him for his fantastic service, and wishing him well for his future."

United sit 14 points behind Premier League leaders Arsenal, with Mata in line to make his debut when they face Cardiff City in the Premier League on Tuesday.