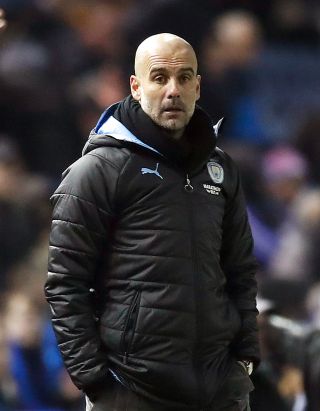 Pep Guardiola claims it makes “no sense” to play behind closed doors and would rather have games suspended.

The likelihood of matches in Britain being played without fans is growing as the coronavirus crisis continues to worsen.

With this already happening elsewhere in Europe, Manchester City boss Guardiola feels it is inevitable Premier League games will be similarly affected.

Guardiola would rather not play at all than play behind closed doors #MCFCpic.twitter.com/Dqee2Ivuma— Andy Hampson (@andyhampson) March 10, 2020

Guardiola said: “We are conscious of it because it has happened already in Italy. The league is suspended and in Spain the next two weeks are behind closed doors. It is going to happen here.

“The other issue you have to ask is, is it worse to play football without the spectators? We do our job for the people and if the people cannot come to watch us, there is no sense.

“I would not love to play matches in the Premier League or Champions League or the cups without the people.

“If without people I would prefer not to play, definitely. We are here for the people. Of course if it is for one or two games I could understand but if it is longer, there is no sense.

Guardiola is unsure whether playmaker Kevin De Bruyne will be fit to feature in Wednesday’s rearranged Premier League game against Arsenal at the Etihad Stadium.

The Belgium international has missed City’s last two games with a shoulder injury but is back in training.

“Kevin (has been) training the last two days but I don’t know if he’ll be able to play tomorrow,” he said.

The match will bring Guardiola up against his former number two Mikel Arteta, who left City in December to take over at the Gunners.

💬 "Obviously now I am in a different position, another bench and I will defend my club as well as I can."— Arsenal (@Arsenal) March 10, 2020

Guardiola said: “I’m looking forward (to it) a lot. I said three or four years ago, when we started together, I was convinvced he would be a manager when the right opportunity came.

“I would say he’s done incredibly well. His ideas are already implemented, already in the team and his positional game is getting better every day.

Guardiola says he is still in regular contact with Artera but he does not give him advice.

He said: “Absolutely not. He’s an adult and more than prepared. He doesn’t need advice from me.

“We talk about how everything is, the family, the first days, how he’s settling in the team. We talk about normal things. We are friends, ex-colleagues. That is all.”

City are hoping to bounce back from Sunday’s derby loss to Manchester United at Old Trafford.

Guardiola is backing goalkeeper Ederson, whose errors led to both United goals in the 2-0 defeat.