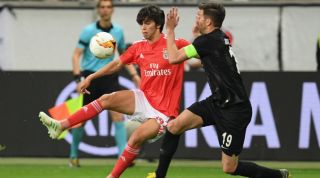 The 19-year-old has shone for the Portuguese outfit this season, attracting attention from some of Europe’s biggest clubs including City and their neighbours Manchester United.

A reported in A Bola claims that City’s signing of Felix depends on finding a buyer for Jesus, who has started just 20 games for Pep Guardiola’s side this season.

The Citizens are said to consider the Benfica starlet’s €120 million release clause too high, and are looking to work around it by including players in a deal to lower the fee.

The Lisbon club are keen to keep the Portugal Under-21 international for another season to help him continue his development, but it will be difficult for them to resist a large bid.

Felix has scored 18 goals in 41 appearances in all competitions for Benfica this season, providing 11 assists.