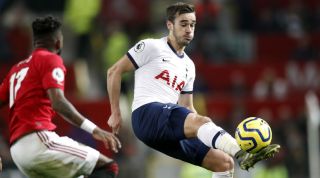 Manchester City's business this month is understood to be focussed on addressing their defensive problems.

The club reportedly feel they are well stocked in other areas and can wait until the summer before making further additions.

One such area that City are preparing to recruit in is midfield as they prepare for the end of Fernandinho's prominence in the side.

The Brazilian has been a key figure in City's rise to the summit of English football and is still trusted with steadying a leaky defence.

Pep Guardiola has been utilising him in central defence to plug a gap which the club failed to fill last summer, following the departure of Vincent Kompany.

However, despite Fernandinho's diligence and versatility, he turns 35 in May and is yet to renew his contract that runs out the following month.

City are exploring the possibility of signing Tottenham's Harry Winks as a potential replacement, according to David Ornstein's column in The Athletic.

It is reported that Winks is 'one of several' options City are considering as they prepare for life without Fernandinho.

City could be scuppered by their local rivals Manchester United, however, as they consider a move for Winks this month.

Ole Gunnar Solskjaer is understood to be very keen to bring in midfield reinforcements this winter window.

As for Winks, he appears to have fallen out of favour under new Spurs boss Jose Mourinho.

The 23-year-old has broken into the England set-up and may be concerned about his lack of game time with regards to Gareth Southgate's Euro 2020 selection.