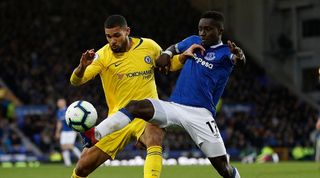 The Spaniard appears set to depart Old Trafford for PSG when his contract expires at the end of the season.

And the Evening Standard believes that Gueye, who was the subject of a bid from the French champions during the January transfer window, has been earmarked as the leading candidate to take Herrera’s place in the United midfield.

Ole Gunnar Solskjaer is understood to have put the Senegal international on his list of summer targets, after the Red Devils refused to accept Herrera’s £200,000-per-week wage demands.

Gueye could be available for under £30 million and is likely to be one of several new arrivals in Manchester this summer.

Other midfielders who have been linked with the club include West Ham’s Declan Rice and Saul Niguez of Atletico Madrid, but the experienced Everton man wouldn’t have as high a price tag.

Gueye has made 28 Premier League appearances for the Toffees this season and is in his third season at Goodison Park since joining from Aston Villa in August 2016.

QUIZ! Can you name these 20 players from their iconic celebrations?