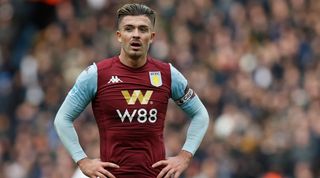 Manchester United have stepped up their interest in signing Jack Grealish from Aston Villa this summer, reports the Manchester Evening News.

Grealish could finally leave boyhood club Villa at the end of the season, even if they manage to avoid relegation from the Premier League. They are currently just a point outside of the drop zone.

Tottenham Hotspur failed in an attempt to sign Grealish in 2018 for £25m. It's now believed that the 24-year-old could have a £45m release clause written into his contract - which runs until 2023.

United are keen to finalise their summer targets before the end of the month and Grealish is high up on their list. Leicester City's James Maddison is another attacking midfielder being considered.

The club are keen to stay within their policy of signing young, British players. This was seen last summer when Harry Maguire, Aaron Wan-Bissaka and Daniel James were all brought to Old Trafford.

Ole Gunnar Solskjaer is a big fan of Grealish, having told the midfielder he was the best player on the pitch when the Villans drew 2-2 at Man United in December.

United are aware that their target's valuation could soar over the coming months if he is selected in Gareth Southgate's England squad for Euro 2020.