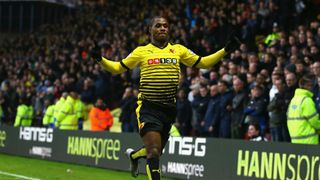 Watford striker Odion Ighalo would find it hard to say no if Manchester United made an approach for his services but has played down the prospect of leaving Vicarage Road this month.

Ighalo has been one of the standout performers for Quique Sanchez Flores' side on their return to the Premier League - helping Watford to ninth in the table with 20 games gone.

The Nigeria international has 14 goals in 20 top-flight appearances this term, having also scored 20 times in the Championship last term as Watford went up as league winners.

Amid speculation linking him with a move to the likes of Atletico Madrid and Roma, Ighalo says he wants to stay in the Premier League, most likely at Watford.

But the 26-year-old acknowledged United would prove difficult to turn down.

Former Udinese and Granada man Ighalo told The Sun: "There has been speculation from Spain and Italy but I've played there and now want to play in England.

"I don't think I will be moving but I'm not sure I'd say no if United called.

"They were my team growing up. I loved watching Andy Cole and Dwight Yorke on TV.

"They were my idols and playing at Old Trafford has always been a dream."