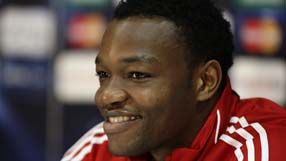 The 25-year-old is set to start in goal for the French champions against United at Old Trafford on Tuesday in the second leg of the Champions League last-16 tie between the two clubs.

Sir Alex Ferguson is thought to be scouring Europe for a replacement for current No.1 Edwin van der Sar, who recently reiterated his desire to retire from football at the end of the season.

Mandanda is believed to rank highly on the United manager’s list, but the French international insists he has no desire to cut short his current contract with Marseille for a transfer to the Red Devils, which runs until 2014.

"There is nothing in it [the Manchester United rumour]," the shot-stopper told La Provence.

"I have a contract with Marseille and have no intention of changing squads."