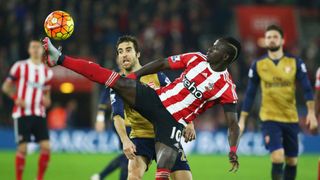 Sadio Mane does not deserve a much-hyped move to Manchester United, according to former Arsenal striker Ian Wright.

Mane missed Southampton's 1-0 loss to Norwich City at Carrow Road after arriving to the pre-match team meeting late and was criticised by manager Ronald Koeman after the game.

The controversy occurred in the midst of rumoured transfer interest from Premier League giants United, with manager Louis van Gaal keen to add pace to his team in wide areas.

But Wright said Mane's behaviour showed a lack of professionalism, adding the forward still had an obligation to perform for Southampton.

"You can't turn up to meetings late, wandering in and acting like that.

"There's nothing wrong with him wanting to go but he’s still got to perform.

"He's one of the top boys, he proved that last season. You want to see him bursting a gut to help Southampton out of this mess."