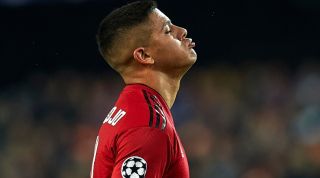 The Argentina international has fallen down the pecking order at Old Trafford and remains likely to be sold this summer, the Times reports.

Rojo is said to have been furious when his deadline day move to Goodison Park collapsed.

The 29-year-old had agreed a deal to join Marco Silva’s side on loan with the obligation to buy next summer, but United executive co-chairmen Joel and Avram Glazer apparently blocked the move because they see Everton as a direct rival for the Champions League places this season.

As things stand Rojo is the seventh-choice centre-back in Manchester United's squad, and the club will look to move him on before the window shuts across Europe on September 2.

Fenerbahce, Milan, Napoli and Monaco are understood to have expressed interest in Rojo, who started just one game under Ole Gunnar Solskjaer last season.