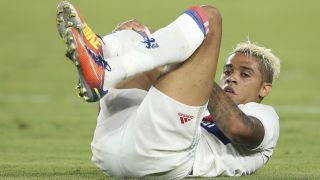 Lyon striker Mariano Diaz says he does not know if his contract contains a clause allowing Real Madrid to re-sign him.

The 24-year-old left for Ligue 1 in a reported €8million deal in August and has enjoyed a promising start to his career in France, scoring six times in eight league appearances.

Mariano's form has led to speculation Madrid could attempt to bring him back to the Santiago Bernabeu in January, with Karim Benzema and Cristiano Ronaldo struggling for goals and Alvaro Morata having left for Chelsea.

However, he insists he is unaware of any buy-back option, telling Onda Cero and Radio Marca: "I signed for five years with Lyon but I don't know if Madrid have any purchase option."

Mariano is also delighted with how he has settled in Lyon after admitting he followed the advice of Zinedine Zidane by moving there.

"I'm really pleased with how things have started," he said. "The French league is very physical and I've learned a lot in the last few matches.

"I had a few offers and Lyon made a strong bid for me. [Alexandre] Lacazette left a space in attack and Zidane recommended I come here. He advised me that it'd be a good option."

Mariano hopes his performances in Ligue 1 could attract the attention of Spain head coach Julen Lopetegui.

The forward appeared in a friendly for the Dominican Republic in 2013 but wants to play for the country of his birth in future.

"I would love to play for Spain one day," he said. "It's my objective and I'm working for it, but it's a decision for Lopetegui."