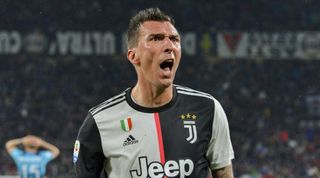 United attempted to sign the Croatia international in the summer transfer market, but the deal collapsed over the player’s wage demands.

But according to The Sun, Mandzukic is now willing to settle for a pay packet worth around £150,000 a week – less than half of what he was initially demanding.

Ole Gunnar Solskjaer is desperate to add to his attacking options when the transfer window reopens in January.

United did not sign a replacement for Inter-bound Romelu Lukaku, while they also loaned Alexis Sanchez to the Nerazzurri.

Solskjaer has consequently been short up front in the opening months of the 2019/20 campaign, particularly after Anthony Martial suffered a hamstring injury in August.

The France international made a cameo appearance in Sunday’s 1-1 draw with Liverpool, but United are still keen to bolster their strike force in the mid-season market.

However, the Norwegian recognises the need to supplement the squad’s youthful core with more experienced players.

And Mandzukic, who has represented Bayern Munich, Atletico Madrid and Juventus in recent years, has been identified as an ideal short-term solution to the team’s striker shortage.

The Croatian is thought to be available for around £10m after falling out of favour in Turin following Maurizio Sarri’s appointment ahead of this season.

Mandzukic has received offers from Qatar but would prefer to extend his career at the highest level by moving to the Premier League.

United will be looking to build on Sunday’s positive performance against Liverpool when they face Partizan Belgrade in the Europa League on Thursday.