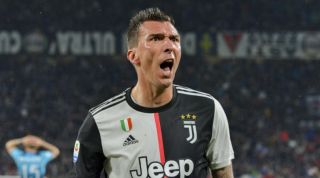 The Croatia international was believed to have been close to signing for United last summer, but the move didn't materialise.

United were in pursuit of Mandzukic's team-mate Paulo Dybala and it was thought that a double deal might be done.

However, any agreement depended on Romelu Lukaku travelling in the other direction - but Lukaku had his heart set on Inter Milan.

Dybala, meanwhile, had no intention of leaving Juventus and was keen to prove himself to new coach Maurizio Sarri.

Mandzukic ended up caught in the middle of a transfer whirlwind, and despite United reigniting interest late on in the window, a deal couldn't be done.

But now, according to Tuttosport, the Red Devils have come to a verbal agreement with the player and his representatives regarding a January move.

Ole Gunnar Solskjaer is desperate to add a sharpshooter to his misfiring squad, whose players failed to register a shot on target in the Europa League last week.

With Alexis Sanchez following Lukaku to Inter, albeit on loan, United have been left short in attacking options this season.

Their 17-year-old prodigy Mason Greenwood is emerging, but it's thought that Solskjaer doesn't want him to be relied upon too heavily at his age.

Mandzukic has plenty of goalscoring pedigree, having scored 44 times in 162 games at Juve.

But the 33-year-old is now out of favour in Turin, having been omitted from their Champions League squad this year.

He reportedly turned down an offer from Qatari outfit Al-Ryyan recently, in favour of getting a move to Old Trafford over the line.