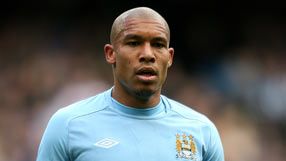 Marseille forward Ben Arfa, who was loaned to Newcastle United during the close season, had his fibula and shinbone broken in a tackle by De Jong and is expected to be out of action for several months.

"We will file a claim against De Jong. We have to get rid of this type of individual from European pitches," OM president Jean-Claude Dassier told French TV channel TF1 on Sunday, without elaborating.

De Jong escaped punishment at the time but Netherlands coach Bert van Marwijk left him out of the Dutch squad for their Euro 2012 qualifiers against Sweden and Moldova.

The player also attracted criticism in July's World Cup final against Spain for kicking Xabi Alonso in the chest. De Jong received a yellow card for the challenge.

Dassier added Ben Arfa had asked Marseille for help with his recovery.

"We will do everything we can, obviously," he said.

France coach Laurent Blanc also supported Ben Arfa, telling TF1: "Hang in there, Hatem, this is a difficult moment in your career but you will get through it."