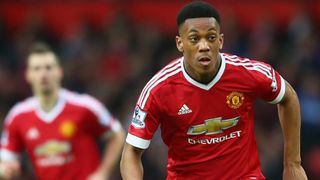 Manchester United midfielder Michael Carrick hailed team-mate Anthony Martial as "unplayable" after the Frenchman guided the side to the fifth round of the FA Cup.

Martial set up goals for Wayne Rooney and Juan Mata as United defeated Derby County 3-1 in their fourth-round clash at the iPro Stadium on Friday, and Carrick was quick to laud the 20-year-old French forward.

"Anthony was fantastic, but he has that ability," he told The Mirror. "He's shown that from day one since his debut against Liverpool, when he scored.

"We have to realise how good he is and can't expect everything from him all the time.

"But, when he's in that kind of form, he's pretty much unplayable, so it’s nice to have him playing for us."

United were leading 2-1 late in the game before Martial assisted Mata for the goal that killed off the contest.

"He does a lot of good things. He can beat opponents one against one, score goals or play it back to people like he did for me and our third goal.

"I really enjoy playing with him, doing one-twos and making chances. He has unbelievable potential.

"He has to keep calm, which he is doing, and show that kind of form in every game."