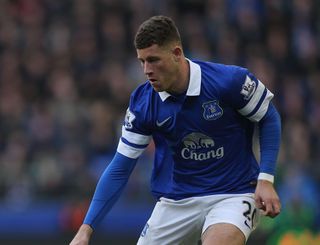 Barkley's rise to prominence this season has seen the midfielder become an England international, with a place in Roy Hodgson's FIFA World Cup squad an increasing possibility.

Stones has also drawn plaudits for a series of exemplary displays at the heart of Everton's defence, the former Barnsley centre-back thrust into action when Phil Jagielka sustained a hamstring injury against Chelsea in February.

The duo's performances have sparked rumours of moves away from Goodison Park, with Barkley reportedly interesting Manchester United, while Chelsea have recently been linked with Stones.

However, Everton boss Martinez described the rise of the young players as the club's "biggest success story" this term and insists the club do not need to sell their prized assets.

"The biggest success story of our season has been the development of our young players," said Martinez at a general meeting for Everton shareholders.

"For me, it is extremely exciting to see how players like Ross Barkley and John Stones have developed and that will continue to be central to what we want to achieve here.

"As long as young players are treated the same as the guys who have played 500 games, then they understand that there is a learning process, and that they have to keep improving. It is easy to motivate them in that way.

"The one thing everyone needs to know is that we are not in need of selling players.

"If we sell, it will be because the time is right and the squad will be in a stronger position because of it.

"What is important as a football club is that you don't have to sell to survive. That is not going to happen.

"Will there be new faces coming in and going out? Of course. With every window we need to get fresher, we need players coming in. But we do not have to sell."