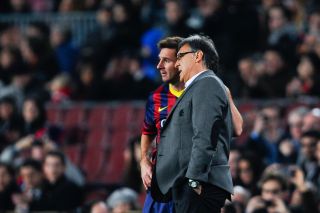 Messi had not played since November 10 due to a hamstring injury but shook off any signs of rustiness with a brilliant three-minute period at the end of Barcelona's 4-0 win over Getafe in their Copa del Rey round of 16 first leg at the Camp Nou.

The 26-year-old forward tapped in Barcelona's third goal of the game in the 90th minute, before unleashing a free-kick less than a minute later, which hit the side netting.

Messi then capped off his comeback appearance with an archetypal driving run down the right and thumping finish in the second minute of second-half stoppage time.

"Obviously Lionel Messi's career could be used as film script, it would make the perfect story for a cinema," Martino said after the match.

"When people think Lionel Messi is not at his best, when he's coming back from injury we bring him on and only needs two or three minutes to do what he did.

"What you saw today is just a brief reflection of what he has done so far here at Barcelona and what makes him so good."

But while Messi's cameo was on everyone's lips after the Copa del Rey clash, Martino was unequivocal in who he considered to be the man of the match.

"I felt that Cesc Fabregas was the best player in the pitch today," the 51-year-old coach said of the attacking midfielder who struck Barcelona's first two goals against Getafe.

"His performance has meant that I have a problem for Saturday and you all know what this problem with be as I finally have all my attackers fit for selection for the game."

Barcelona will travel to Atletico Madrid on Saturday for a top of the table clash in La Liga with both teams on 49 points.

Atletico have been the surprise story of the 2013-14 season in Spain but Martino remains confident his team can match Diego Simeone's side.

"We are playing good football, the ball circulation was fast (versus Getafe), we didn't let them organise," Martino said.

"We had control of the match and this is because we're going through our best form so far this season."