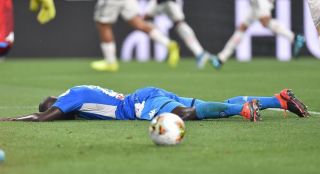 Juventus assistant coach Giovanni Martusciello hailed his side’s never-say-die spirit after a late own goal clinched them victory in a seven-goal thriller against Napoli in Turin.

Juve surrendered a 3-0 lead in the second half before Napoli defender Kalidou Koulibaly’s stoppage-time own goal gifted them victory.

Cristiano Ronaldo looked to have put the game beyond Napoli when he struck Juve’s third goal just after the hour-mark following first-half efforts from substitute Danilo, on his debut, and Gonzalo Higuain, against his former club.

Napoli hit back with two second-half goals in as many minutes from Kostas Manolas and Hirving Lozano and then Giovanni Di Lorenzo’s late equaliser, but Koulibaly turned the ball into his own net in the second minute of added time.

“We had an important physical decline, and against a strong team that dribble like Napoli, that was the thing that put us in difficulty,” Martusciello told a post-match press conference.

“At 3-0 we had a ‘full belly’ and we allowed Napoli to come back. But what really strikes me about this group is the fact that they never give up, and that in moments of difficulty, it brings out something more.”

Juve also handed a debut to Matthijs De Ligt, in place of injured skipper Giorgio Chiellini, and Martusciello was satisfied with the Dutch defender’s first appearance following his £67.5million move from Ajax.

“De Ligt? He comes from a team that defended differently, in a league that is not the Italian one,” Martusciello added.

“He also played well for an hour, then his condition was lacking a bit. But he is a player of the highest level.”

Martusciello has been carrying out media duties in the absence of Maurizio Sarri, who watched Juve beat his former club from the stands following his recovery from pneumonia.

Napoli boss Carlo Ancelotti could not hide his disappointment at the manner of his side’s defeat and their performance.

“We conceded two goals with our defence in position. We need to mark tighter in the box,” the former Chelsea manager said.

“This was a missed opportunity tonight. We started playing football after an hour. I would have been disappointed even if we had drawn.

“The comeback is the only positive. I’m disappointed with the overall performance.”