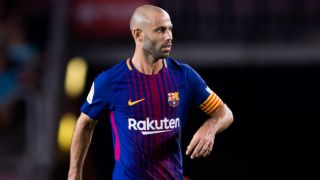 Javier Mascherano has accepted that his time at Barcelona is drawing to a close and he is eager to learn from his Liverpool exit in order to depart Camp Nou on good terms.

The Argentinian joined Barca from Liverpool in 2010 and has gone on to enjoy immense success in Spain, winning the Champions League twice, LaLiga four times and four Copa del Rey titles.

He also successfully adapted to a new role at centre-back after originally being signed as a defensive midfielder.

But at 33 years of age and featuring less frequently under Ernesto Valverde this season even when fit, Mascherano – whose contract expires in 2019 – is aware that his time in Catalonia is running out.

And he is hopeful that his departure – whenever that may be – is rather more amicable than his Liverpool exit, something he previously claimed came about due to broken promises.

Speaking to ESPN, Mascherano said: "I think that my stage here is ending. It makes sense that after such a long time there's not much more I can do in this club.

"I'm not saying it with a heavy heart. I've had the best years of my career in this club. I'll never forget it.

"I'm one of those people who thinks that you have to know when is the right time to end a stage.

"I would like to end mine [with Barcelona] at the right time, but it doesn't really depend on me.

"I am predisposed to end it on time because when I left Liverpool it wasn't good for me, and I didn't like it.

"I didn't like having the feeling that I could go back to Liverpool and there was still something toxic there.

"And I don't want the same thing to happen to me at Barcelona."