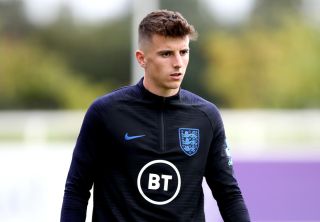 Mason Mount cannot wait to line up alongside old friend Declan Rice once again as the talented youngster prepares to follow in Chelsea manager Frank Lampard’s footsteps by playing for England.

Eyebrows were raised last October when Gareth Southgate first called up the then teenager during his loan spell at Derby, whose run to the Sky Bet Championship play-off final was overseen by the manager he is back working with.

Chelsea great Lampard’s return home has seen highly-rated Mount finally get a shot at Stamford Bridge, with the 20-year-old scoring two in four Premier League appearances for a club he joined at under-9 level.

Good to see you both! 👋@masonmount_10 🤝 @_DeclanRicepic.twitter.com/QIOpYCaJzs— England (@England) September 2, 2019

It was during his time in the Blues’ youth ranks that the attacking midfielder became close friends with Rice, who may have moved onto West Ham but should soon fulfil their dream of playing together.

“That’s something we’ve spoke about for a long, long time,” Mount said.

“Being very, very close friends with him, that was something we always looked forward to something maybe happening in the future and this chance could happen.

“Obviously speaking together with him it’s very exciting. We’re very, very close, known each other for a very, very long time.

“We’ve always spoken about that opportunity of maybe playing with each other again.

“Playing with each other at Chelsea at that young age, it was something special between us, so we’ve always kept that hope of it maybe happening again.”

Rice has three England caps to his name since making the switch from the Republic of Ireland, while Mount is hoping to make his bow in one of the upcoming Euro 2020 qualifiers against Bulgaria and Kosovo.

“It’s obviously a massively proud moment for me,” he said after being unused in the Nations League matches in Croatia and Spain.

“It’s a massive moment for me and I’m looking forward to these next few days.

“You always dream about that – that call-up, that start for England – as a kid.

“I’ve always dreamt of that and looking forward to these next two games, working hard in training so hopefully that can happen.”

Mount does not have to look far if he wants any advice given manager Lampard represented his country 106 times.

Next month is the 20th anniversary of the Chelsea manager’s England debut and the former midfielder has provided a sounding board as well as the platform for the 20-year-old to flourish.

“Having one or two chats with him, he said it’s obviously such a proud moment playing for your country, just go and enjoy it,” Mount said.

“It’s such an exciting time in English football and he just said go there and enjoy playing football for England.

“When I got called up first last year he sat me down in his office and said to me that I was called up and obviously it was a massive, massive moment for myself.

“And this time, he just spoke to me and said ‘look, you’ve been called up again, go into it working hard, like you have been at Chelsea’.

“I spoke to him a little bit and have taken stuff off him as I do always.”

Dealing with external pressure is another thing that Lampard can offer advice on, although it does not appear that Mount needs much help.

“My family have always said ‘don’t worry about the pressure side, you just need to focus on what you do on the pitch’.

“I’ve always stuck to that and tried to work hard and every time I get to play, try and do my best.”