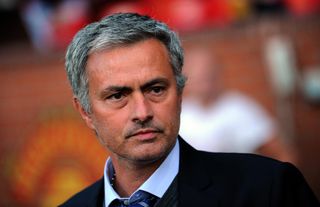 Mata was left on the bench for Chelsea's 0-0 draw with Manchester United at Old Trafford on Monday, and has featured just one in their three Premier League games so far this season.

The Spain international's agent, who is also his father, reportedly attended Arsenal's UEFA Champions League clash with Fenerbahce as a guest of Chelsea's London rivals, leading to speculation that Mata could move to the Emirates Stadium.

However, Mourinho -  who is set to secure the capture of Anzhi Makhachkala attacker Willian - stressed that Mata was purely rested on Monday and will not be exiting Stamford Bridge in this transfer window.

"There is no chance Juan goes," Mourinho said.

"He had a very small pre-season after the Confederations Cup. And during that pre-season he was injured.

"He started training two days before we played the first league match.

"He played against Aston Villa and I decided to put him on the bench against United."

Although Mata's future looks to be at Chelsea, his regular first-team place appears to be under threat, with last season's UEFA Europa League winners reported to be in advanced talks with Porto winger Christian Atsu.

Mourinho will attempt to secure his first trophy since returning for a second spell with Chelsea when they face Bayern Munich in the UEFA Super Cup in Prague on Friday.